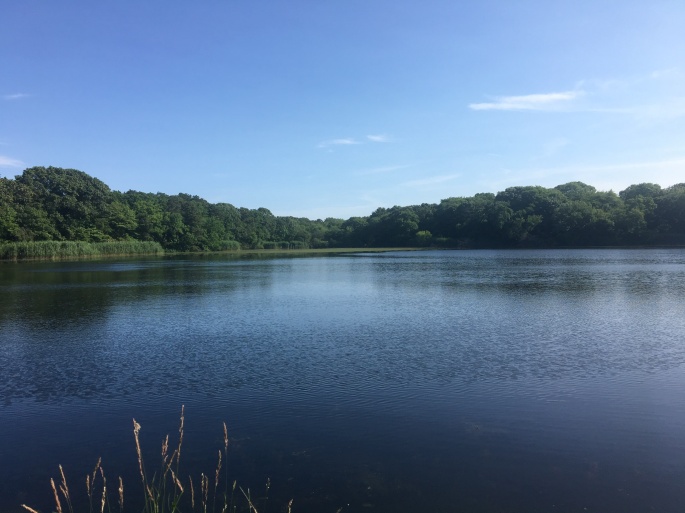 On these hot summer days I think of all the times I rode in the heat but one day really stands out. It was the day of the bike club picnic. It was close to 90 degrees Fahrenheit at the start of the ride and very humid. We had about a dozen riders including the new guy that had just started riding with our group.

I believe the ride was to Belmont Lake and it was the day after the hot century ride which most of us participated in. The ride was going well. We went to the lake and we took our pictures. On the way back we hit the hottest part of our ride. We were rolling through an industrial area. It was very sunny with no shade in sight. Most of us were in need of water so we planned a water stop at the closest 7/11.

A few minutes from the water stop a member of our group got a flat. I wasn’t leading the ride but I was commander in chief and couldn’t leave my men behind. Half of the group went on to the water stop while the rest of us remained behind in the blistering sun with our friend who had flatted. They were getting the tools out for the flat change.

I was too hot to just stand around in the sun. I scanned my surroundings. That’s when I noticed it. There was a large office building with a few small trees in front of it. Each small tree cast enough shade for three to four people to take cover under. I went right for it. The guys looked up and saw where I was headed and they all spread out under the trees. They calmly changed the flat and I’ll never forget the funniest little detail. It was a senior member of the club. He was using a small hand pump and when it got tough he turned to the new guy and asked the new guy, who was young and strong, to pump. The new guy was more than happy to rise to the occasion. He finished the job and got our friend rolling again.

When we arrived at the water stop the rest of the group gave their sympathies that we had stood around in the hot sun while they were very comfortable in the shade. We looked at each other and laughed. We then informed them that we also remained very comfortable in the shade. One of the guys mentioned that one of us had a great idea by heading for the trees.  We rolled on to finish the ride with no other setbacks and enjoyed ice cold drinks and food at the picnic.

On hot days please have compassion and support your friends. It’s not their fault when they have mechanicals in the heat. Just remember to take in your surroundings and be creative about staying cool. Check on your elderly neighbors to make sure they’re alright. Stay cool and don’t go too hard in the heat. Be safe everyone!